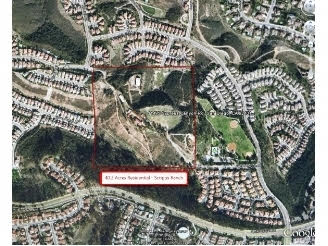 We had 38 residents on the Zoom call and thank you for participating in the discussion including Austin Dias, The Phair Company President. The SR Civic Association (SRCA) hosted this first community meeting and is planning to host more community meetings to discuss relevant issues such as traffic, recreational opportunities, grading, construction impacts, fire evacuation, and Adult Care Facility. This particular community meeting was about the relocation of the multi-family residential units from the northside of the development to a more central location.

The Phair Company, a residential developer came to the SR Planning Group in May of 2018 to explore possible initiation of a community plan amendment. At some point Jeff Phair became ill and the proposal was suspended until February 2019. The City Planning Commission voted to approve the Initiation of the Community Plan Amendment for 110 residential units (100 single family homes and 10 apartments). The applicant is asking to rezone the property from default 1 home per acre to RX 1-1 which means 1 home per 4,000 sf minimum parcel size.

We are waiting for Draft Environmental Impact Report (DEIR) to be issued by the city. The developer pays for the consultants to prepare the DEIR but it is a city document. The SRCA will post links to the DEIR and will send you via email the links as well. We go a step further by collecting comments from the community to be sent to the two planning groups for inclusion in comments from the planning groups.

The SRPG and MRNPC will vote to submit comments about the inadequacy of the DEIR. There are 45 days for public comment to the DEIR. Every comment will be responded to by the city in the Final EIR (FEIR). No timeline for the all the responses to be prepared and whether an issue arises that requires a change in the EIR. A FEIR will be finished and city typically schedules City Planning Commission 30 days afterwards.

The existing chain link fencing around the property will be removed after construction. Phair will have common boundary walls and fencing.

Storm water runoff from the new homes and streets will be collected in storm drain that will empty into a bioswale for filtration in a .43 acre basin located in the northeast corner of the property. This is similar to the bioswale being constructed at Fairbrook Park.

A nature trail is planned to connect the homes in the lower elevation to the upper elevation. A fire access lane will connect Street “A” homes to Street “B” homes that ties into Cypress Canyon Road. No expected physical changes to Cypress Canyon Park.

No grading plan yet released. The site map does include elevations. Phair was asked to include aerial photos on the site map.

Residents raised concern and agreement on issues of whether Cypress Canyon Road (aka The Spine Road”) should connect or have cul de sacs as proposed. The next SRCA hosted community meeting #2 will be about traffic. Phair agreed to have their traffic consultant at the next meeting. We are scheduling that meeting as soon as possible.

Please note that documents do change without notice and it is imperative that you are reviewing the most current document.

If you have any questions, concerns and/or comments, please email Bob Ilko at [email protected].

Documents from The Phair Company: